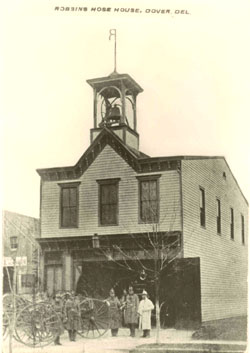 In 1869, the town of Dover purchased "40 fire buckets, six ladders, and four fire hooks for the use of the Town in case of a fire." In 1869, the Town purchased a hook and ladder apparatus "at a cost not to exceed $260." The purchase was made and the truck brought to Dover on December 23, 1869. Two bad fires, the Wilmington Conference Academy (now Wesley Junior College) in 1876 and the Capitol Hotel (now offices on State Street) in 1879 started a demand by the citizens for a fire company. The Town owned the hook and ladder truck purchased in 1830 and the hand pumper, now displayed in the Delaware State Museum in Dover.

The sum of $1,500 was raised by popular subscription towards the purchase of two hose carriages and other equipment. These carriages were named the "Robbins" and the "Dover" and along with the ladder truck were housed in a shed on North Street.

Thirteen years later, in November 1882, seventeen men met in the Old Fellows Hall, which was located on the second floor of a building on Loockerman Street. One dollar was collected from each man present and the treasury for "Robbins Hose Company" was established.

The name Robbins comes from James W. Robbins (1831-1876) who died six years before Robbins Hose was officially organized but apparently had been generous and interested member of the local fire brigade. He was a partner in the firm of Richardson & Robbins, Inc., a company that was once a vital part of the business and social community of Dover. 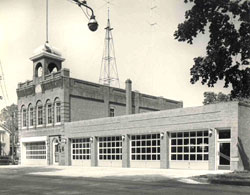 Eldad Clark was elected the first President of the Fire Company and five committeemen were appointed to draft a set of bylaws and a constitution, which were later adopted. W.D. Walls was the first Chief Engineer.

The company had been active before 1882, but things really started rolling for the firemen after their official organization. The first fire of record was on January 28, 1883, a small house on the road to Little Creek.

1883 was a busy year. A committee was appointed to visit the State Legislature in an effort to obtain appropriation. Their efforts were successful and the company was granted $200 and an act of Incorporation on January 25, 1883. A new firehouse was built on a lot purchased for $550. That lot is now vacant. The present firehouse, which was built in 1922 and expanded in 1948, is, located a short distance away on the east side of Governors Avenue.

Interested in joining a worthwhile organization and helping your community?